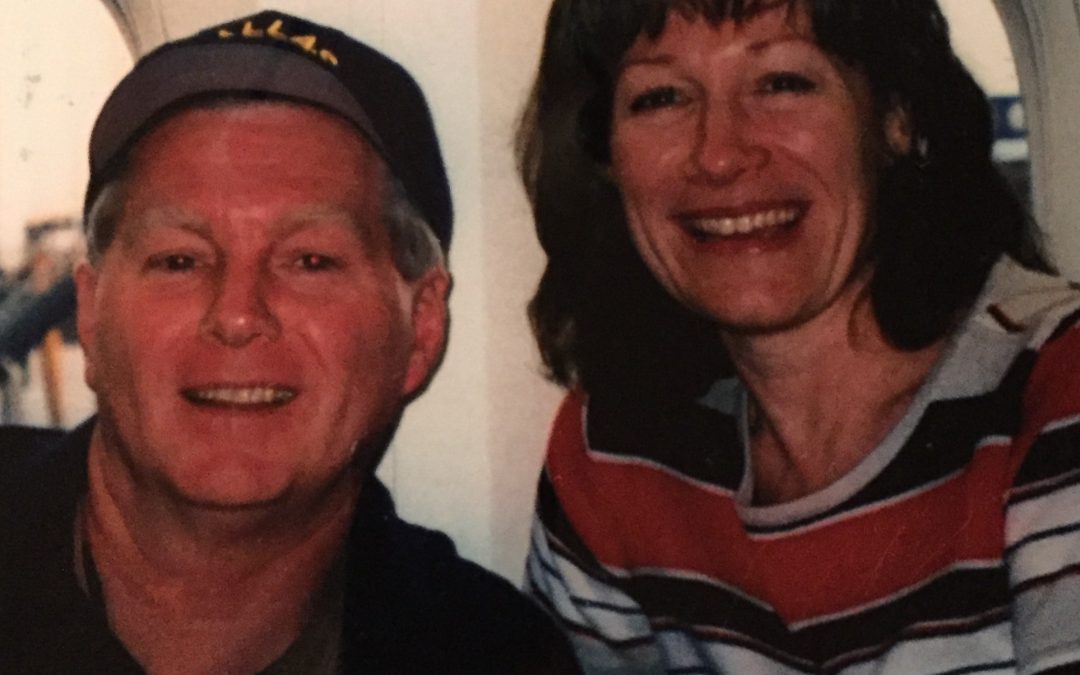 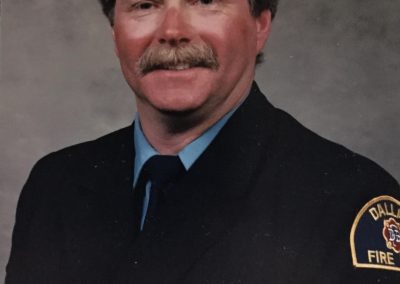 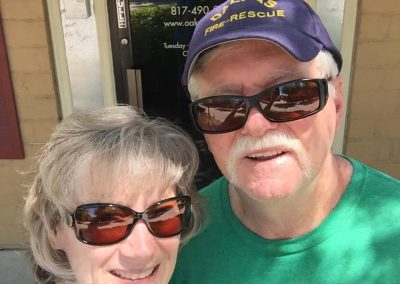 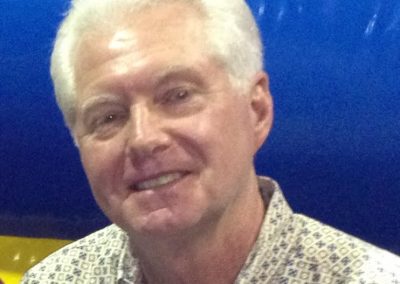 A dedicated firefighter in the great state of Texas for over 32 years, Pat, continued working two full time jobs to prepare for his and his wife Tricia’s retirement. He enjoyed participating in adventures and listening to Led Zeppelin in his downtime. In 2011, Pat and Tricia were enjoying building their dream home and planning for retirement, when Tricia started to see signs that something was off with Pat. His handwriting changed. He was showing increased irritability and impulsivity. She noticed he was becoming more clumsy and slow with movement. His lack of social cues/skills were distinct:

“We went to a Titanic exhibit and Pat kept getting close to people, as if he didn’t notice they were there.”

Pat also started having increased trouble sleeping, obsessive-compulsiveness, and restless leg syndrome. Tricia noticed he was having trouble seeing while driving and in 2013 she knew she needed to get to the bottom of this. Tricia requested for his doctor to check Pat out. Pat’s initial complaints to his doctor were: “slow movement, having difficulty seeing while driving, restless legs, monotone facial expression and slurred speech when tired.”

This is where Pat’s life shifted.

Pat received a diagnosis of Parkinson’s disease. He had no reaction, almost as if he didn’t hear it, yet his wife Tricia had many questions. Pat continued working, on more of a consultant basis. The neurologist started Pat on Sinemet, a common pharmaceutical drug utilized to attempt to slow progression of Parkinsons, PSP, and other neurological diseases. They completed their arrangements, updating their power of attorney and living wills, trying their best to prepare with little input on what the future may now hold. She recalls they had to have the hard discussion, almost every person battling with a neurodegenerative disease does, “Will you want a feeding tube?”

Pat continued to attempt to carry on with life as per usual.

Even with Tricia’s mother’s increasing care needs in their home, she continued to encourage Pat to participate in research and therapy to delay disease progression and find possible treatments. Tricia signed Pat up for a “Punching out Parkinson’s” class. Pat was also participating in a 4-year research study for Parkinson’s disease when Tricia began noticing new cognitive symptoms. Pat was demonstrating increased impulsivity and having difficulty managing finances. He would play video games with nothing on the screen. Sleep was becoming even more disturbed for the both of them. Tricia inquired to others in a support group meeting one day as to what neurologist they were seeing, convinced Parkinson’s was not the accurate diagnosis. In 2015, she was able to find a local movement disorder specialist who referred Pat for a neuro-psychological exam, among others, and provided a differential diagnosis, Lewy body dementia.

Tricia thought, “it just didn’t seem like he had dementia”. He wasn’t following the typical pattern of dementia throughout his routine check ups. During one of her many sleepless nights researching for information that could better describe his symptoms and how she may be able to better accommodate to this new life in their golden years, she finds:

She quickly advocated to the neurologist for more testing. She explained that symptoms of PSP match more clearly to the symptoms Pat was exhibiting, particularly his vertical gaze and vision complaints, and insisted Pat undergo a magnetic resonance imaging test (MRI). The specialist ordered three imaging assessments and the results came back:

Tricia was puzzled! How could it come back with no sign of PSP? He exhibited most of the symptoms of PSP! Nevertheless, Pat continued with the Sinemet medication, gradually increasing the dosage. Each time the dosage was increased, Pat responded positively. Tricia credits this medication for Pat’s lack of rigidity and increased speech consistency. She continued to advocate for a more accurate diagnosis and found a research specialist for dementia. After a formal examination, this neurological specialist provided Pat with a diagnosis of frontotemporal lobe dementia-progressive supranuclear palsy (FTD-PSP).

Home health options and/or hospice were not discussed.

Tricia managed to care for Pat unaware of what assistance was out there to help keep Pat in the home. Pat progressed quicker than either had hoped or could imagine. Pat’s symptoms became evident at work and he was unable to continue. She bought an adjustable bed and a roll in shower chair. She had fidget spinners readily accessible! As Pat’s language impairment (aphasia) and muscle weakness in the throat (dysarthria) became more prevalent, it became more difficult to infer what Pat was trying to say. At some points he would speak in full sentences and at other times, he wouldn’t speak for weeks.

“Pat was referred to a Big and Loud Speech Therapy Program!”

“His voice volume improved greatly. Using the decibel meter helped him realize what others heard.” Tricia also used total communication modalities to communicate with Pat at times, utilizing hand gestures and a letters/numbers board to spell communication attempts. She would ask yes/no questions to help with communication breakdown. Communication barriers became more evident when family and friends would come to visit and were unsure of how to utilize total communication versus verbal speech only. Fortunately, Pat’s personality was able to shine throughout the communication difficulties. Tricia knew that although his speech and language were impaired, he was well aware of what was going on around him.

“I never knew about augmentative and/or alternative communication (AAC) modalities, or the involvement of speech-language pathologists in the treatment for dysphagia (swallowing).”

Tricia tried her best to provide diet modifications as swallowing became more difficult, blending his favorite foods and using natural nectars. She is thankful for her nursing education that allowed her to have insight into how to help with a progressive decline. Her biggest medical support? Tricia’s primary care physician (PCP).

“She would always say, ‘you need to get help in the home!’”

In the midst of contemplating searching for help, her PCP added Pat as a patient and put in a referral for home health to assist Tricia. When Tricia became unable to move Pat without assistance, she also called hospice.

“I’ll never forget how wonderful the physical therapist was!”

Pat’s physical therapist came up until the day before, offering comfort and kindness to Pat and Tricia. Tricia stated that Pat’s process towards the end was nothing short of heartwrenching. Pat’s swallowing and mobility rapidly deteriorated, causing heaving and sweats. The morphine caused worse side effects. Although Pat was never diagnosed with pneumonia, hospice recommended no more food/drink by mouth in the last days. Pat exclaimed, “I’m hungry!”, and Tricia tried her best to accommodate his wishes, yet Pat was unable to move his mouth or tongue to chew and/or swallow.

“I don’t think you are going to be able to swallow”, Tricia sighed.

“I don’t either”, Pat responded.

Tricia again discussed the feeding tube option. Pat was able to shake his head no and with a whisper said, “under no circumstance”. At just 65 years young, planning for retirement and still too young to receive social security, Pat had succumbed to a neuro-degenerative disease. Although Pat’s communication was affected at times, he was able to tell Tricia right before passing,

Pat was an organ donor and they courageously decided to provide his brain for donation. Within months of Pat passing, Tricia received the results from the Mayo Clinic in Jacksonville, Florida. After years of Tricia searching for an accurate diagnosis, the Mayo Clinic report came back with a primary diagnosis:

“I was in total shock!”, Tricia exclaimed. Pat never exhibited contractures of his limbs and never showed one sided weakness. She did notice dexterity changes, years prior, but she and the neurologist had reviewed Pat’s case history numerous times, through and through.

Tricia is extremely grateful for their children and their spouses for helping them through Pat’s most difficult time. She reflects on being a little reluctant about Pat attending a Dallas Cowboy’s game with his children months before passing, due to increased difficulty with swallowing and mobility. She rejoices in making the decision to take him to experience this event. Although it may have been over-stimulating for Pat, he really enjoyed the quality time with his family.

“If I won the lottery, I would create a training space for caregivers, physical therapists, occupational therapists, speech-language pathologists, and other medical professionals to learn how to care for individuals with progressive supranuclear palsy (PSP) and corticobasal degeneration (CBD).

Tricia’s continued advocation for the love of her life helped Pat prepare for an unknown future and increased Pat’s quality of life during his battle with CBD. Pat never had an accurate diagnosis while struggling, despite seeing multiple specialists regularly. Tricia knew Parkinson’s and Lewy body dementia did not fit the bill. Pat exhibited almost all of the symptoms of PSP, which can be closely associated with CBD symptoms, however he only received a PSP diagnosis less than 2 years before passing. Pat’s brain donation has brought definite answers to the symptoms Pat was experiencing and highlights the need for an across the board, accurate diagnostic criteria for CBD. Tricia continues to spread much needed awareness of both PSP and CBD. She also supports others battling PSP and CBD in national and international online support groups.

“I want to help those going through it right now!”

Tricia’s advice to other caregivers struggling with neurodegeneration, “Get help! Get night time help, I never got any sleep! I wish I knew about palliative care sooner and to involve hospice earlier”. She inspires others who are struggling with these neurodegenerative diseases. Giving back to the community, all while she grieves the loss of the love of her life. After many years of managing Pat’s health and countless nights researching for possible accurate diagnoses, she continues to be there for others,

To find out more about Corticobasal Degeneration and Progressive Supranuclear Palsy, check out our website or contact us!

Get updates right in your inbox on what is going on with the PSP & CBD Foundation.